Anna Roemer Visscher was a Dutch artist known for her work in diverse artistic fields, including poetry, calligraphy, and glass engraving. In addition to her gifts for poetry and the visual arts, Visscher played the flute, lute, and the viola da gamba. One of her artistic works was eulogized in sonnet form by the poet and physician P. Hogerbeerts while she was just fifteen or sixteen years of age, an indication that her artistic family had its share of admirers at an early stage. Her father, Roemer Visscher (1547–1620), was an Amsterdam merchant and a poet of the Dutch Golden Age. Her sister, Maria Tesselschade Visscher (1594–1649), was also a poet and engraver.

Visscher was part of the Muiderkring (or Muiden Circle), a gathering of figures in the arts and sciences who often met in the castle of Muiden in North Holland. Many of these friends were key figures of the Dutch Golden Age. Along with Visscher and her sister, Maria, other members of the group included the historian Pieter Corneliszoon Hooft (1581–1647), the poet and composer Constantijn Huygens (1596–1687), the poet and playwright Joost van den Vondel (1587–1679), and the poet and playwright Gerbrand Bredero (1585–1618). This group of artistic elites admired Visscher in particular, referring to her as a second Sappho and a fourth Grace. In a eulogy by Daniël Heinsius from 1616, he refers to Visscher as “the elect of Pallas…born from your father’s head,” and in Jacob Cats’s Maechden-plicht (1618), she is described as “the tenth of the nine Muses.” These panegyrics demonstrate that Visscher and her artwork were greatly admired by her fellow artists and poets. In 1620, Peter Paul Rubens praised Visscher’s virtue in an inscription connected to an engraving he dedicated to her.

All these social connections served Visscher well, as evidenced by the engraved glass she made for Huygens as a gift. This representative work, etched on dark green forest glass known as Waldglas, displays Visscher’s talents as both poet and artisan. The type of vessel, also known as a roemer, rummer or römer, was a type of drinking glass—usually for wine—that was popular in the Netherlands and the Rhineland in the seventeenth century. It was studded with smaller, decorative pieces of glass, known as prunts, that allowed for an easy grip. These drinking vessels appear in a number of Dutch still life paintings of the period, especially those by Pieter Claesz.

There are five extant roemers, each with calligraphic inscriptions, bearing Anna Visscher’s signature, though it is believed she engraved at least twenty-six glasses. According to scholars, Visscher’s achievement in the field of glass calligraphy represents the introduction of a more naturalistic style largely derived from botanical manuals. Visscher engraved text into her glassworks as well as imagery from the natural world, specifically insects, fruits, and flowers. Her application of diamond-point stipple engraving to glass is viewed as an important innovation.

In 1624, Visscher married Dominicus Boot van Wezel, and in 1625 she gave birth to their first son, Romanus. Their second son, Johannes, was born in 1626. Visscher’s career slowed considerably after her marriage and the birth of her sons, although she did continue working. She and her husband converted to Catholicism around 1640. A few years later, on November 14, 1640, the Antwerp magistrature presented Visscher with a silver dish in recognition of an engraved chalice that she had gifted to the city. She died in Alkmaar in 1651. 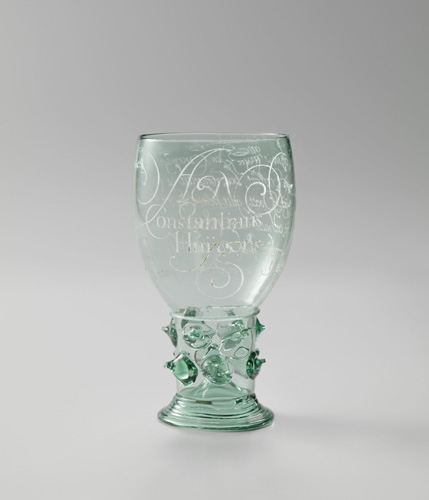 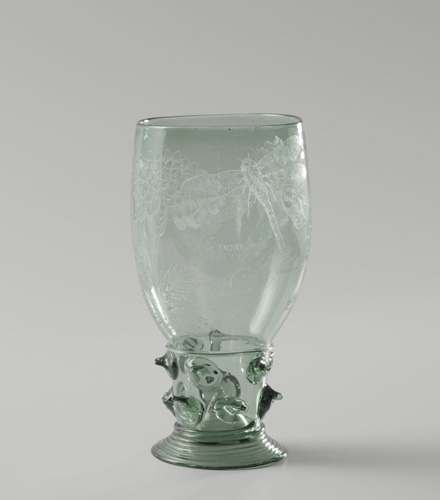 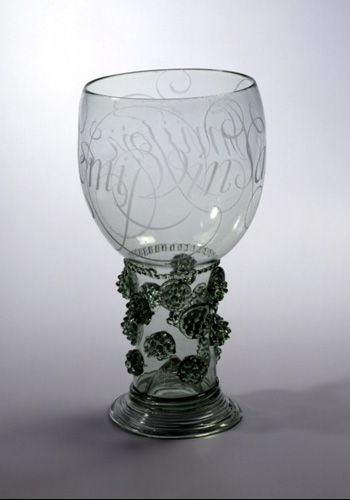